START TODAY! IT’S NOT TOO LATE! WE CAN DO BETTER!

by
448 Views
No Comments
Press Releases

Bird now lives in Birmingham Alabama with his daughter Xandy(6) and Wife Erika.

He is a member of NSAI and writes, records, and produces with the help of veteran Producer Michael Rich.

Gardner Cole(Madonna, 25million albums sold), among many others. He has had music placed in various movies and TV shows throughout the years

Including Van Wilder which took the single Forgot Your Name to over half a million views.

His latest efforts including, “F” This Heart Of Mine” has had over 3 million hits on soundcloud(@bird3music)

I know people are automatically skeptical when they see a band with a number in their name. While most of these name-number combinations make sense only to the band members or no sense at all, Bird3 is easy for anyone to figure out. The bird comes from the lead vocalist Bird and the 3 comes into to play because the band is a trio. Ok now that we got that straight, let’s look at what’s important here � The Music!

To put it bluntly � Bird3 accomplished what most bands set out, but often fail to do with their debut albums � create a great collection of songs that not only cause the listener to sing along after the first listen but have those melodies still linger long after the CD is over.

Ok but what do they sound like? That really depends on which song you are listening to. Bird3’s brand of powerpop-modern-rock sounds at times like the Foo Fighters at other like Radiohead and still at other times like Blink-182 or a modern rock reincarnation of The Who. That is quite an eclectic mix, but they pull it off beautifully. 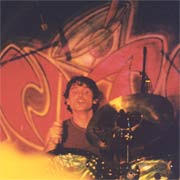 On the surface the songs may sound simple � power chord driven modern rockers but upon closer listen you hear some incredible musicianship � with drummer Michael Miley providing impressive fills every chance he gets. Greg Coates often times approaches his playing as if the bass was a lead instrument. What about Bird? Aside from delivering some great rock guitar chops, his vocals come across with a soulful modern rock resonance.

Instead of locking themselves into one niche � Bird3 seems to want to spread their wings, experimenting with various areas of modern rock, power pop and updating elements of classic rock. Their CD opens with the power-pop rocker, “fit”, with a sound reminiscent of the Marvelous 3. On the next track – “mess” – they take a different tact and deliver melodic alt-rocker that would make the Foo Fighters jealous. “forgot your name” is a bittersweet song about looking back on lost youth, this mid-tempo rocker sounds like a modern interpretation of the early Cars sound. Bird3 enters Radiohead territory with “Glow”, a powerful ballad that will cause lighters to ignite when performed live. With “Girl Next Door” Bird3 stumble into the punk-pop territory with a tongue in cheek rocker that gives Blink-182 a run for their money. That’s just the first five tracks, the rest are equally as good and diverse – as you can see this disc has a lot of offer. 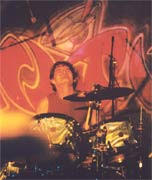 The most amazing thing about Bird3 is the members are all so down-to-earth. They haven’t let their talents go to their heads. Sure they know they got the goods, but they seem content to make music they love and this is really apparent when they play live. For an hour and half they give it their all, mesmerizing the audience with their high energy performance. Ok the angel wings Bird wears during their live shows is a little goofy but they also have a certain charm and show that these guys don’t take themselves too seriously.

Long story short, I hear a lot of new bands in this line of work but very few make the kind of first impression on me that Bird3 did. Their CD has easily become a favorite and their live shows leave a lasting impression. If you are looking for some new music superstars, whose first priority is world class music then you can’t do better than Bird3 � This June when their debut CD hits the stores do yourself a favor and be one of the first to discover this impressive new band.